Originally published November 1998. Huh, apparently I could occasionally be decent at asking questions to get to the heart of a controversy regarding writers leaving titles. Of course it helps when your interviewee is willing to talk about that stuff and thankfully Joe Kelly was. At this point Joe was mainly known as a comedy writer for his great work on Deadpool. Now that he’s done a variety of more serious/normal comic work he doesn’t gives such jokey answers to interview questions anymore.

An Interview with Joe Kelly

The most wild and zany writer on the block has come to Collector Times. Joe Kelly (after some whip cracking) gave us this wonderful interview about Deadpool, the X-men fiasco, and other neeto stuff. Read on!

Jamie: How do you keep coming up with the gags for Deadpool?

Joe Kelly: I have vast library of demented childhood experiences to draw from, and a closet full of lines I SHOULD have said when some jerk put me down in High School, both of which serve me well on Deadpool. Also, I watched way too much TV as both a child and an adult, so I STEAL STEAL STEAL from my favorite shows!

Jamie: Are you reminded of the CCA by your editor when writing Deadpool? Does the CCA force you to cut or tone down some things?

Joe Kelly: Absolutely, Matt does a very good job of reminding me that there is a code to be followed, and when I’ve pushed a border unnecessarily. However, we’re not slaves to the code, either. If we have a really good reason to push the limits, he lets he go for it. As a general rule, we don’t need to break the code. There’s plenty of latitude within it, if you’re clever and a little naughty.

Jamie: After reading the Deadpool/Death annual, I wonder if you had a crush on Death when you were young?

Joe Kelly: Nope. I’ve always been fascinated by the Death visual- The hood, the bones, scary! However, I’ve never had a crush on death, nor do I support Death as a recreational activity in any of her many forms.

Jamie: Will Thanos be angry at Deadpool for his relationship with Death?

Joe Kelly: I hope so! makes for a cool story, no?

Jamie: How long before Deadpool breaks away from the “saviour” storyline and starts interacting with the rest of the Marvel Universe?

Joe Kelly: JANUARY! The DEAD RECKONING story arc ends in December, and then Deadpool has a lot of issues to face in the rest of the MU.

Jamie: When will we see T-Ray and Typhoid Mary again?

Joe Kelly: We’ll definitely see T-Ray in 1999. As to Typhoid, I’m not so sure… Maybe next year too, but probably not in the same capacity.

Jamie: What’s the current status of Deadpool? Heard any news, good or bad?

Joe Kelly: As of this writing, Deadpool’s sales are actually UP, and we are NOT being canceled! Yay! I have no idea how long this reprieve is going to last, but we’ll make the most of it.

Jamie: What do you think about John Byrnes retconing the Concentration Camp out of Magneto past?

Joe Kelly: I honestly don’t have an opinion on that.

Jamie: Rumor is you and Seagle quit the X-books because of the editors. Is this true?

Joe Kelly: It was a variety of reasons. To put it concisely, The editors had a certain vision about the X-Men and the way they should be written. We had a different vision. As a result, the final product fell somewhere in the middle, and therefore short for both sides. We left because we didn’t want to do half-baked work.

Jamie: What exactly did the editors do to you and Seagle that drove you off?

Joe Kelly: Like I said, it wasn’t so much a matter of what they did to us, It was more a matter of us not clicking as a group. This, coupled with the fact that everyone at Marvel is concerned about losing their job right now, causes people to make bad choices. This got frustrating, so we all agreed it was time for a break. I DO NOT HATE ANYONE IN THE X-OFFICE! Just wanted to make that clear.

Jamie: What was the straw that broke the camel’s back, so to speak?

Joe Kelly: Steve and I were told that we weren’t going to be involved in the long term planning and outlining of the next story arc, but were still expected to write the issues based on someone elses template. If that had always been the case, if we were “dayplayers” on the X-Men from the beginning, this wouldn’t be such a big deal. However, in light of the events leading up to it, it was obvious this was a last ditch attempt to try and “fix”” something that was way too broken, so we left. That being said, I’d also like to clear up another internet rumor- I DO NOT HATE ALAN DAVIS!!! People have been paraphrasing things that Steve and I said in Australia, and putting it in direct quotes. I have nothing against Alan, and wish him all the best on the X-Men.

Jamie: Is the problem the same all across Marvel or is just with the X-books?

Joe Kelly: The X-Men is Marvel’s number one franchise, so naturally there is more scrutiny on those books than some of the others.

Jamie: Which X-characters did you enjoy writing the most?

Jamie: Do you prefer to write team books or individual titles?

Joe Kelly: Team books is hard!!! I’d like to try another team book, but not as big as the X-men. Maybe three characters, or four.

Jamie: If you had the chance to write for DC, what characters or titles would you choose?

Jamie: Writing wise, who are your influences?

Jamie: How exactly do you write your comics? How much detail do you give the penciler?

Joe Kelly: I tend to put in a lot of description, but with the intent that it can all be thrown out so long as a) The storytelling comes across, and b) the artist comes up with a cooler way to show something. My scripts are almost full script style, but only because I’m trained as a screenwriter, and that’s more comfortable to me.

Jamie: Outside of writing comics, what do you do with your time?

Joe Kelly: Take care of my new house, my new wife, and plan for my soon to be new baby. I do a lot of work around the home, play videogames, read comics, ride my mountain bike. Sometimes, I pretend to be a cop and shake down druggies for needles, which I then make into sculptures of the Eiffel tower.

Jamie: What kind of music do you listen to? Who are your favorite bands/singers?

Joe Kelly: I listen to everything. At the moment, I’m into lounge music, but I listen to Nirvana, Sublime, the Doors, Jazz, Punk, PJ, Billie Holiday… Everything!

Jamie: What advice can you give to writers trying to get work at Marvel Comics?

Joe Kelly: BE PERSISTENT, BUT NOT ANNOYING. Right now, the entire industry is shrinking. It’s going to be very difficult for new writers to get in the front door at Marvel. So what folks should do is a) Attack smaller companies and try to build a name for themselves, b) Send in Springboards and 1 page story ideas to editors with a SASE for feedback, but without expectations, and c) try to self-publish, so that they can send in a finished product to be read over a script. Write every day, and try to get a job that will support you while you try to hammer your way into Marvel. That way, if the industry collapses, you can give me a job! 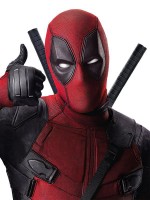 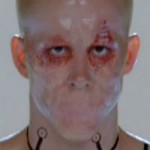 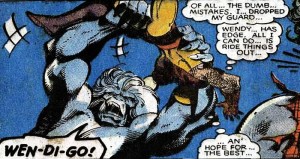