Over the weekend I went to Toronto Comicon. I used to attend this con regularly but stopped going back in 2013. I won’t go into the details as to why, but I will say it was nice to go back and see some people whom I haven’t seen in many years. Compared to San Diego Comic Con and TCAF, this con was ‘light’ work for me in terms of recording panels and didn’t require me to take days off work to get my stuff online quickly. I audio recorded 5 panels and took some pictures.

Two of the panels were spotlight panels of creators I’ve recorded before at San Diego (Steve Englehart & Ron Wilson) but I learned some new stuff about the creators at both of them. I’ve recorded Denny O’Neil at other panels, but not a spotlight panel. I also learned that some colourists really don’t like working on Green Lantern books and that Marvel’s current Editor in Chief C. B. Cebulski really appreciates it when a creator makes a very difficult deadline.

All of the panels were in the same room and it was easy to find the comic guests. Having a laptop with me instead of a tablet made a huge speed difference in terms of preparing audio and pictures. As usual with this convention, there was a lot of cosplay and one could spend all their time just taking photos of cosplayers and still not get them all. I used to take a lot more photos but between going to panels, taking photos of pros’s, chatting with friends and doing some shopping for myself I no longer have the time to devote to it.

I did take a couple of short videos showing some of the fun of happening at the convention with cosplayers.

The only thing that disappointed me about the trip was the handy and close to the convention public parking lot I used to use was no longer there. It’s been replaced by large half-built condo sky scrapper, which meant finding a new place to park and going for a longer walk. 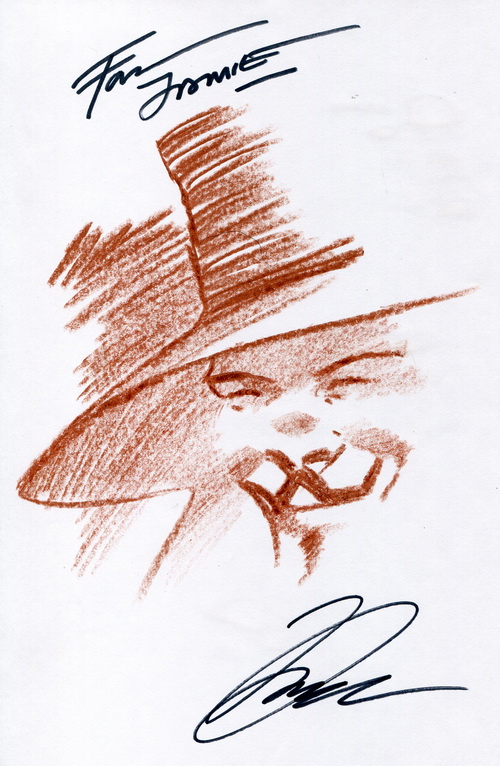 A bunch of my friends on facebook are calling this Will Eisner week to celebrate the man.

In going over some old notebooks I came across some notes I took the one time I met and saw Will Eisner talk on a panel. This was at the 2004 Paradise Comics Toronto Comic Con. I was not yet recording panels so I only have the notes I scribbled down. The notes are faded and will be illegible soon so I’m putting them here to preserve them.

The title of the panel was Graphic Novel Pioneers. On it was Will Eisner, Dave Sim and Chester Brown.

Will Eisner starts off telling Dave Sim “We have to be very careful about what we say, there is an audience.”

Eisner thinks a Graphic Novel is about the content, not page numbers.

He thought readers were older and wanted to read something other than 2 mutants smashing each other.

Eisner said the President of Ballantine Books was very impatient.

Chester now accepts the Graphic Novel name. He didn’t before.

Al Capp told Eisner in 1945 he’d never make it, said he was to normal.

Rube Goldberg told Eisner that comics wasn’t nothing but vaudeville and jokes.

Spirit got 5 million in circulation, that was considered nothing then.

Eisner talked about how comic strips had huge cultural impact among immigrants.

Eisner said Superman had the same costume as strong man in circus.

Eisner said the Spirit was supposed to be short stories. Eisner did Splash pages to get attention.

Dave did Cerebus because of the direct market, the retailers took all the risk. He did things in Cerebus that he knew couldn’t do in Marvel/DC. He had almost complete freedom and he pushed boundaries.

Eisner thought undergrounds was literature because Denis Kitchen introduced him to them.

Eisner sold his company and went into doing Graphic Novels.

Eisner credits the undergrounds for the Graphic Novel.

Eisner thinks the Editor should be the reader surrogate, tell him what doesn’t work and Eisner will fix it himself. He doesn’t want advice.

Chester uses Seth as his “editor” to give him advice. Sim did it all himself.

Eisner used Dave Shiner, a friend, as an editor, he died recently. He now uses his wife Ann who never read comics prior to this.

Eisner said doing comics is like sex. He doesn’t like talking about it while he’s doing it. After he’s finished, then he goes through it.

Eisner starts writing with the ending. He writes a timeline, not the story.

With Louis Riel, Chester did his work on panels with dialog at first, did stick figures if he didn’t think he would remember.

Will Eisner and Chester Brown

Will Eisner talks to media