I attended a local convention in Kingston, Ontario called King Con. It was held this year at Sydenham Street United Church at 82 Sydenham Street. I personally enjoyed the show and chatting with some creators, some I hadn’t seen in several years.

Some of the creators include: J. Torres, Andrew Wheeler, Attila Adorjany, Kat Verhoeven, Tom Fowler, Craig A. Taillefer, Andrew Thomas, Salgood Sam, San Noir, Dan Day and more. Andrew Wheeler did a panel on the history of LGBTQ Superheroes which I recorded.

There was also a popular magic show, which I enjoyed as the magician (James Harrison) had a very good act. I was talking with him earlier and he was doing the whole ‘find the ball’ trick on me with.

At the end of Saturday there was a cosplay contest that was mainly aimed at kids.

Pictures are here and Audio is here.

The winner of the cosplay contest is here (recorded and posted with permission): 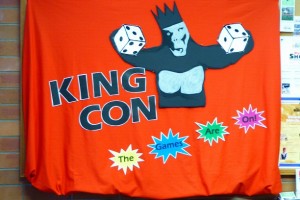