Originally published in May 1999. I went a little more fanboy-ish with this interview, but I did ask him some questions about editors and got answers that I probably should have expected.

An Interview With Dan Jurgens

Dan Jurgens is best known for his work on Superman, but today he is working on other books like Thor, and has just been announced as the new writer for Aquaman. He, along with Jerry Ordway, will also be doing a Fantastic Four/Avengers mini-series. Dan answers questions on all three projects and more!

Jamie: When will the Fantastic Four/Avengers mini series be out?

Dan Jurgens: Plans call for us to ship the book in September.

Jamie: I’m assuming we’ll see the traditional FF line up, but what will the Avengers line-up be?

Dan Jurgens: Jerry Ordway will be writing and drawing the Avengers book and the line-up will primarily consist of the traditional core group.

Jamie: What will the story be about and is it in current continuity?

Dan Jurgens: The story places the FF and Avengers together in an epic adventure featuring a new villain and a fun trip through Marvel’s past.

Jamie: Both you and Jerry Ordway are writer/artists. Who will be writing and who will be drawing, and how did you guys decide to divide the responsibilities?

Jamie: Erik Larsen and other former Aquaman writers have complained about “creative difficulties” with editor Kevin Dooley, even saying Dooley asked them to rip off other stories. How will you respond if you have similar problems?

Jamie: Will there be any changes to Aquaman’s appearance or his powers?

Dan Jurgens: Not his powers, though I would like to change his hair and costume. Stay tuned.

Jamie: You mentioned that you would be creating new villains for Aquaman, can you tell us about them?

Jamie: What do you plan on doing with Tempest and other Aquaman supporting characters?

Dan Jurgens: Turn them from supporting characters into core characters. Aquaman will be a book about a majestic, royal family. That family happens to be Aquaman, Mera, Tempest and Dolphin.

Jamie: Is there a new artist for Aquaman yet? If so, who, and can you describe their work for us?

Dan Jurgens: There will be a new artist but I can’t announce who it is yet.

Jamie: Erik Larsen said he’s leaving Dolphin’s pregnancy to the next writer. How do feel about it and what do you intend to do with it?

Dan Jurgens: I don’t think Garth should have slept with someone who is essentially his step mother. His relationship with Arthur would never allow that to happen. But I have no say in that now, it’s done, and I’ll deal with it appropriately.

Unfortunately, it symbolizes the continued erosion of the heroic qualities of DC’s heroes.

Jamie: Is there any chance you will draw a fill in for either Aquaman or Thor?

Jamie: Roger Stern and Peter David reportedly both sent in proposals to become Thor’s writer, how did you beat them for the coveted job?

Dan Jurgens: I honestly have no idea. I don’t know what they wrote and have no concept about how any of their thoughts compared with my own. I consider them friends and talented writers and would have looked forward to reading their work on Thor.

Jamie: When preparing for Thor, what kind of research did you do?

Jamie: What was the inspiration of the Dark Gods?

Dan Jurgens: Tough question. It started with trying to create a pantheon of gods based on today’s thoughts and values, or lack of them.

Jamie: What is it like working with John Romita Jr.?

Dan Jurgens: John’s absolutely brilliant and incredibly well suited to this book. It’s a treat to see what he does each and every month.

Jamie: Do you have any plans on drawing a regular series again?

Dan Jurgens: I’d like to at some point. I’m not avoiding it at all. Just seems to have developed into a situation where I’m writing the monthly stuff and drawing special projects.

Jamie: What tools do you use when penciling?

Dan Jurgens: I draw on the board Marvel and DC supply me with, using a .05 mm mechanical pencil, HB lead.

Jamie: After the Fantastic Four/Superman crossover will you try to get any more comics published in the Treasury Sized format?

Dan Jurgens: I’d love to do a Superman/Thor book in that format.

Jamie: Who is the easiest editor you have worked for?

Dan Jurgens: Hard to say, though it should be noted the easiest editors aren’t necessarily the best. I like working with editors with whom I share a vision of what the book should be.

Jamie: What caused you to leave the Spectacular Spider-Man book?

Dan Jurgens: Mostly the fact that the editor and I had profound differences on what a good Spider-Man story was.

Jamie: What other projects will you be doing in the future?

Dan Jurgens: That covers it for now!

Artist Paul Ryan has passed away at the age of 66. You hear about comic creators dying and while they are all sad, this one hit me harder than most. I met Paul at least once or twice at conventions and was always happy to see and talk with him.

Paul drew the 2nd comic I ever bought, which was D.P. 7 #2. I would eventually go on to collect the entire series. It is one of my favourite comics of my youth. Paul drew all 32 issues of the comic but Lee Weeks drew the D.P. 7 Annual. The entire New Universe line of books were panned back in the day, but many noted that D.P. 7 was easily the best of the bunch and is fondly remembered by fans like myself.

Paul and D.P. 7 writer Mark Gruenwald worked together on the first 6 issues of Quasar. While I didn’t collect it I did buy the odd issue, particularly the issue that had Quasar go to the New Universe and visit the D.P. 7 cast of characters. I’ve never had any desire to buy original art but I had a serious look at Paul’s D.P. 7 pages. If I saw something I really liked for a decent price I likely would have bought it. Sadly most of the good pages I would have been interested in had been bought already. 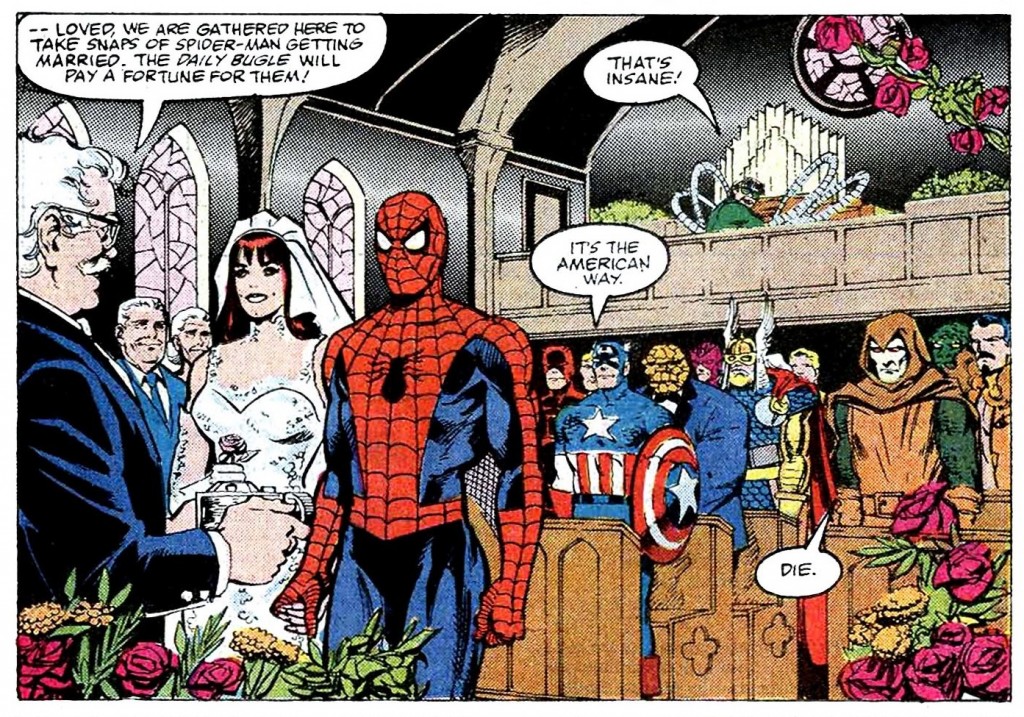 Paul’s most famous 80’s comic was The Amazing Spider-Man Annual #21, which featured the marriage of Peter Parker and Mary Jane Watson. I also enjoyed Paul’s run on Fantastic Four with Tom DeFalco in the 90s. I know those comics get a bad rap but they were fun, fast paced, popcorn reading. At the time comic industry sales were crashing and if I remember Dan Ravi’s Comic Wars correctly the editors were put under immense pressure to increase sales every quarter in spite of this. DeFalco (who was then the Editor in Chief) and Ryan did their best to do entertaining stories while keeping the upstairs people happy. Their run was filled with with gimmick covers, shocking revelations (Alicia is really a Skrull named Lyja the Lazerfist!), costume changes and more. Paul would go on to draw many more comics for Marvel, DC and other publishers.

Paul had been drawing the Phantom newspaper strip since 2005 and I always happy that he found solid, steady work as he fell out of flavour in comic books. Sadly, many artists do not and are heavily reliant on the convention circuit and fan commissions to support themselves. Many more just don’t get any more work in comics and have to go into some other field. Paul’s consistency and clarity in telling a story were among the qualities that lead to him having a long and successful career in comics.