A bunch of my friends on facebook are calling this Will Eisner week to celebrate the man.

In going over some old notebooks I came across some notes I took the one time I met and saw Will Eisner talk on a panel. This was at the 2004 Paradise Comics Toronto Comic Con. I was not yet recording panels so I only have the notes I scribbled down. The notes are faded and will be illegible soon so I’m putting them here to preserve them.

The title of the panel was Graphic Novel Pioneers. On it was Will Eisner, Dave Sim and Chester Brown.

Will Eisner starts off telling Dave Sim “We have to be very careful about what we say, there is an audience.”

Eisner thinks a Graphic Novel is about the content, not page numbers.

He thought readers were older and wanted to read something other than 2 mutants smashing each other.

Eisner said the President of Ballantine Books was very impatient.

Chester now accepts the Graphic Novel name. He didn’t before.

Al Capp told Eisner in 1945 he’d never make it, said he was to normal.

Rube Goldberg told Eisner that comics wasn’t nothing but vaudeville and jokes.

Spirit got 5 million in circulation, that was considered nothing then.

Eisner talked about how comic strips had huge cultural impact among immigrants.

Eisner said Superman had the same costume as strong man in circus.

Eisner said the Spirit was supposed to be short stories. Eisner did Splash pages to get attention.

Dave did Cerebus because of the direct market, the retailers took all the risk. He did things in Cerebus that he knew couldn’t do in Marvel/DC. He had almost complete freedom and he pushed boundaries.

Eisner thought undergrounds was literature because Denis Kitchen introduced him to them.

Eisner sold his company and went into doing Graphic Novels.

Eisner credits the undergrounds for the Graphic Novel.

Eisner thinks the Editor should be the reader surrogate, tell him what doesn’t work and Eisner will fix it himself. He doesn’t want advice.

Chester uses Seth as his “editor” to give him advice. Sim did it all himself.

Eisner used Dave Shiner, a friend, as an editor, he died recently. He now uses his wife Ann who never read comics prior to this.

Eisner said doing comics is like sex. He doesn’t like talking about it while he’s doing it. After he’s finished, then he goes through it.

Eisner starts writing with the ending. He writes a timeline, not the story.

With Louis Riel, Chester did his work on panels with dialog at first, did stick figures if he didn’t think he would remember.

Will Eisner and Chester Brown

Will Eisner talks to media

Review: Mary Wept Over the Feet of Jesus 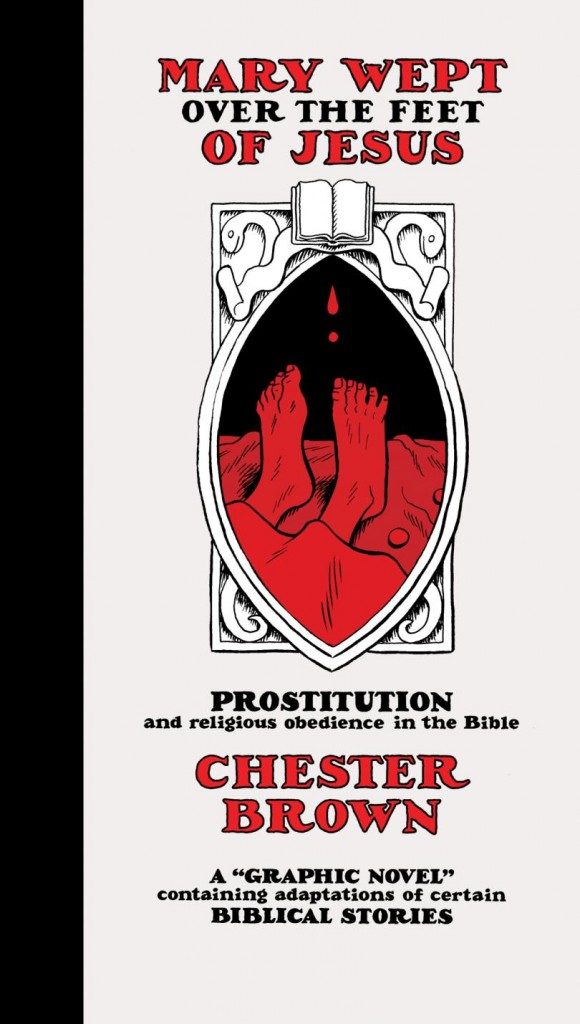 Mary Wept Over the Feet of Jesus by Chester Brown. Published by Drawn and Quarterly.

Mary Wept Over the Feet of Jesus

Published by Drawn and Quarterly

This is Chester Brown’s new book that was published earlier this year. The book contains a number of biblical stories that reinterpret the stories of women in the bible and specifically the women mentioned in Matthew’s genealogy. Chester’s last book, Paying For It was about his experience being a John and using the services of prostitutes. Chester believes prostitution should be legalized and uses these biblical stories to further that goal. This might seem odd because laws and moral disapproval of prostitution comes from Abrahamic religions, but Chester backs up the reinterpretations with research. Within a lengthy notes section Chester goes into detail to which biblical scholars, their books and earlier versions of biblical scripture he used to come to his conclusions.

I suspect this book will be more interesting to those who are into Christianity and biblical studies. Fundamental Christians who view the Bible that absolute truth and the word of god will likely be upset, but reading the notes section (if they get that far) may awaken them to the reality that the bible as we know today is heavily edited. There are earlier scriptures that tell different versions of the stories, issues with how certain words were mistranslated among other things (google Bart D. Ehrman if you want to know more). People who have no interest in religion or prostitution may not find this book all that interesting.

While I did enjoy this book and do have an interest in this stuff, I suspect people who are expecting another Louis Riel or Paying For It might be disappointed in this book.  This collection of short stories doesn’t provide the satisfying feeling of Chester’s longer stories.

You can learn more about the book and read an except at the Drawn and Quarterly website.